Today I got an education.

You see I'm serving as local counsel for a large Ohio firm who is defending a large national company in a lawsuit. You'd recognize it if I named the company, but I won't -- attorney client privilege and all. And really the company is irrelevant to the revelation I got today.

Today we had oral arguments in the case: the kind of oral arguments that could keep us from having a trial. Very big for the client. My colleague from Ohio came in to argue the facts, while I would argue the law. I love days like today -- or at least the idea of them. The rush of preparing, knowing the arguments cold, so I can wow the judge with my verbal prowess and mental acumen. But maybe that's only in my dreams :-)

Dave and I graduated from law school in the same year. But we took two very different paths. He went straight to a large firm, while I took a year for a federal clerkship, and then after moving to Indiana found a job with a great firm that's small by big city standards. The benefits were amplified for me today. You see, I think Dave is brilliant. I am honored to be able to work with him and learn from him and the partner on the case. Dave can write a brief that sings. But today was his first oral argument. It wasn't mine. Instead, since almost the day I started at the firm, I've been thrown into all kinds of situations in court. I LOVE the pressure, the way my mind has to zip and zap from idea to concept. I know how to prepare, so today I wasn't stressed...I had a few butterflies, but they mainly flew in formation.

Dave's first oral argument ended up being a disappointment, not because of his performance, but because the judge truncated our time. Dave's briefs were so well argued, that the judge didn't want them regurgitated to him.

So while I occasionally wonder what it would be like to practice in a large firm, today I was reminded that I've had incredible opportunities because God placed me with the firm He did.

Now I'm just waiting for Him to show me how He's going to use all this skill and knowledge He's giving me!
Posted by Cara Putman at 8:21 PM 1 comment:

Celebrating the Men in My Life 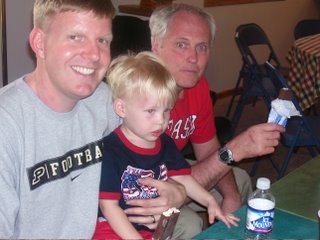 These are the three men in my life. My husband Eric, son Jonathan, and my Daddy (I may be 32, but I will always be his little girl). God has used them to teach me facets of His character.

From my Daddy, I learned that God truly is my Abba Father that I can run to like a little child and receive warm hugs and tons of affection. Through my husband, God has revealed glimpses of His deep love for me. A kind of love that loves me with my faults, but challenges me to be more tomorrow than I am today. A love that supports my dreams and grounds me reality.

And by being a parent I have been overwhelmed with how rich and deep and wide my Father's love must be. From the moment I held Jonathan, I was amazed with the love I felt for him. Why was it a surprise? Don't all parents feel that way? Well, my legal work has taught me that no some parents don't, and Jonathan is my second child. I expected that flood of love with Abigail. With Jonathan I realized that love can multiply. It isn't a zero sum game, but an ever expanding commodity.

How has God used the people in your lives to reveal His love for you?
Posted by Cara Putman at 10:08 PM 3 comments:

In a June 17 article, the Indianapolis Star reported that Planned Parenthood would lease space in its new space to an adoption agency. Does this strike anyone else as startling? I'm still trying to wrap my mind around two organizations with such contradictory missions sharing space.
Posted by Cara Putman at 11:46 AM 3 comments:

I'll admit, after growing up reading Janette Oke's prairie romances, I didn't think a fresh perspective on those tales existed. I am delighted to report I was wrong. 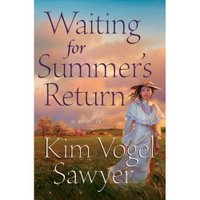 Waiting for Summer's Return, Kim Sawyer's debut novel, shook my preconceptions. From the first page of this delightful book, I journeyed back to 1894 and the windswept plains of Kansas. Sawyer does a fantastic job making the era and characters spring to life. The stuggles of the characters engrossed me, and I delighted as triumphs peeked through the trials. With each sentence she paints a vivid picture of this unique German setting and places you deep inside the minds of the main characters. It is easy to fall in love with the gentle giant Peter Ollenburger. And I grew with Summer through each test and victory.

If you thought there wasn't a fresh twist on the prairie romance, think again. And if you love Janette Oke's books, you will be delighted with Waiting for Summer's Return.
Posted by Cara Putman at 9:35 PM 5 comments:

A recent article in the Indianapolis Star, It's Cheaper for Mom and Pop to Settle by Regan Morris (June 5, 2006), pointed out a rising trend in the legal field. Due to the rising costs of litigation, it is often cheaper for small businesses to settle lawsuits than to defend against them. Even when Mom and Pop know they have done nothing wrong.

According to Karen R. Harned, executive director of the National Federation of Independent Business Legal Foundation, "People are creating cottage industries for litigation."

This a disturbing trend. Small businesses form the backbone of many of our communities. And by filing frivolous lawsuits under the theory that the small business can't afford the cost of defending itself in court, we undercut the foundations of our legal system. And as an attorney who works with small businesses in the heartland, I can attest to the cost benefit analysis that the owners undertake each time a lawsuit is threatened. Whether or not the threat is legitimate.
Posted by Cara Putman at 9:40 AM 2 comments:

All things have a beginning.

In the beginning, God carved the world out of a void.

My beginning occured when my mom caught my dad's eye.

Life is filled with beginnings. School. Marriage. Family. Career. One beginning morphs into more, followed by something new to take its place.

And so this blog has a beginning.

This is a place for examining law, great books, and the random events that put together define our lives. Once a week I will look at the legal landscape because I am an attorney. Another day I will talk about great books I'm reading right now. And a third day I'll write about anything that catches my attention. This is the beginning.
Posted by Cara Putman at 2:36 PM 2 comments: